A WARM WELSH WELCOME ON A COLD DAY 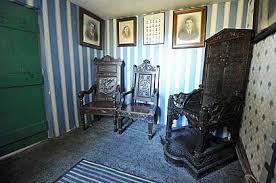 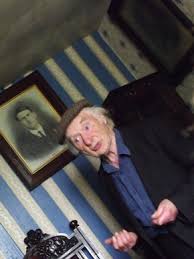 Today we were privileged to to visit the former home of Hedd Wyn, a famous Welsh poet. Hedd Wyn grew up on a hill farm called Yr Ysgwrn near Trawsfynydd, about 20 minutes drive from Graig Wen.

Like many young men from the village, Hedd Wyn volunteered to fight in World War I. Days before his unit was moved to fight at the battle of Passchendaele, he sent a poem back to Wales to be entered in the National Eisteddfod. Hedd Wyn was killed at the Battle of Pilkem Ridge on 31st July, 1917. Just weeks later he was posthumously awarded the 1917 National Eisteddfod Chair at Birkenhead, the highest accolade awarded to Welsh language poets. A chair, perhaps more properly described as a throne, is traditionally awarded to the winner. In 1917 Hedd Wyn’s bardic chair was draped in a black cloth and sent to his family home, first by train, then horse and cart up the track to the farm.

Ever since, the extraordinarily carved throne has been known as ‘the black chair’, representing a generation of Welsh youth lost at the First World War. At least 43 other young men from the small parish never returned home from the War.

Hedd Wyn’s family has cared for this special chair, and others awarded to the poet, observing a tradition of keeping an open door to visitors. We were kindly shown into the farmhouse by Mr Gerald Williams, Hedd Wyn’s cousin. Sat around the glowing grate, 1000 feet above sea level with the east wind casting snowflakes outside, we were warmly welcomed. Untouched by modern life, the farmhouse has now been passed into the guardianship of Snowdonia National Park and there are plans for a linked heritage centre. But nothing could provide a more memorable connection with history than the generous company of Mr Williams in his family home. You can arrange a visit by appointment here.