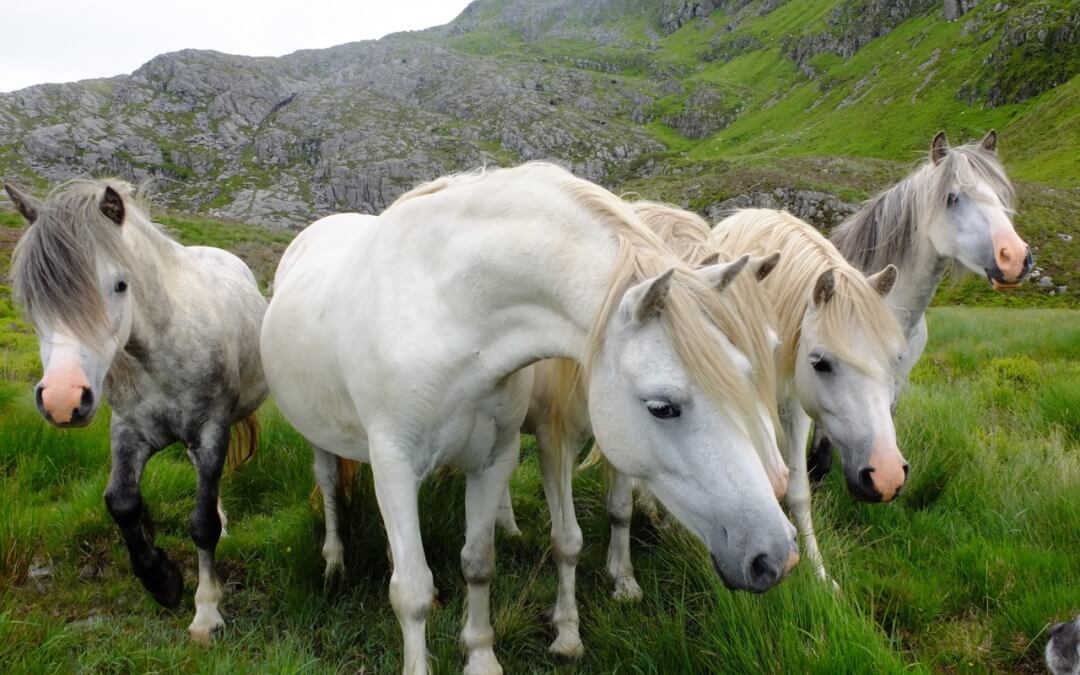 The Rhinog range of mountains has been described as “a secret wilderness of rock, heather and grassland, cut by streams and dotted by lakes. It certainly feels wild, rugged and isolated,but if you know where to go, you can be setting out on foot into the heart of the Rhinogs within an hour of leaving Graig Wen.

We followed a route recommended by the Kittiwake Guide to Walks in the Lakes of Mid and North West Wales. We drove towards to the Rhinogs from the coast up Cwm Nantcol. Where the road runs out, you park and pay £2 at the neighbouring farmhouse, Maes y Garnedd. This remote spot has its place in history, as it was the birthplace of John Jones, one of the men who signed the death warrant of Charles I.

We wandered up the pass with granite slabbed peaks towering above us and peat dotted with mustard yellow Bog Asphodel squelching under foot. A steep climb led up to the first of three little visited lakes. We were looking out for the feral mountain goats known to inhabit the area and it was Bryn the dog who picked up their distinctive scent first. We spotted the shy creatures sunbathing in a little dell and left them to their siesta.

We climbed up higher to Llyn Hywel before dropping down to Llyn Perfeddau, once the home of an ill-fated mermaid according to local legend. We were distracted from looking for mermaids by the jaw dropping view before us of the green valley stretching down to Cardigan Bay, with Bardesy Island on the far horizon.

Five wild Welsh mountain ponies were as surprised to see us as we them. After much snorting they followed us, fascinated by the dogs, through the purple heather. The going was tough and treacherous downhill but there were plenty of ripe bilberries to pick for refreshment.

Heading back into Cwm Nanctol via some old Manganese mine workings, we kept an eye out for Merlin and Ring Ouzel. I think we spotted a young Ring Ouzel flitting from the scattered hawthorn trees and we certainly saw fledgling housemartins taking flying lessons.

You need to be properly prepared for walking in the Rhinogs and it’s not for those who like their paths well signposted – but for those who prefer the path less travelled, it’s paradise.